Diva Foodies goes ’round the web searching for the best and most interesting news in food and drink. Some are fun facts, others are important trends. This week we’re highlighting the new hot demographic group food brands are targeting; unique cooking classes sponsored by the New York Jets; Paula Deen is back and this time she’s going digital all the way; if your jeans are feeling a little looser might be because food manufacturings have cut trillions, yes, you read it right,Trillions of calories; you might be surprised to find out who the top 5 Facebook fast food restaurants by fans are .. hint McD’s not included;  to wrap it up we look at the innovative recyle program launching in Seattle that might take away more than rubbish. 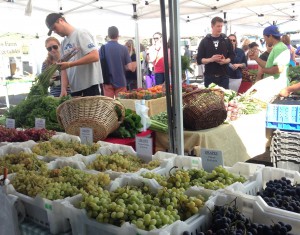 Men Are The New “In” Consumer Group For Food Brands. It’s raining men .. well sort of. Research from NPD Group indicates guys are primary grocery shoppers in over 40% of U.S. households. A significant stat for brands to put resources against building ad campaigns, packaging and even new products targeting the modern male.  Dannon’s Oikos Greek yogurt brand even redesigned its packagaing with a more gender neutral look. We find it interesting that the color focus is blue. Maybe that’s the new pink?

Season Two of The Jets Tailgating Cooking Classes. Year one was a sell out so the New York Jets are again partnering with the Institute of Culinary Education (ICE) to teach its fans how to make the best tailgate meals in the League!  Classes are inspired by teams the Jets will go up against. Deep dish pizza inspired by the Chicago Bears of course; and southern comfort food like friend chicken and mac and cheese is a nod to the Tennessee Titians. Added bonus: attendees get to meet Jet players and Flight Crew Cheerleaders.

American Food Manufacturing Companies Cut 6.4 Trillion Calories. A study released 9/17/14, by the American Journal of Preventive Medicine and published by University of North Carolina at Chapel Hill, reported that as of 2012, food companies reduced calories in food by 6.4 trillion. Experts think this could lead to the healthiest next generation in decades.

Top 5 Fast Food Restaurants By Fans. With 19,925 “likes”, USAToday reports Krispy Kreme has the most fans per store on Facebook. In-N-Out-Burger comes in second with 10,859; followed by Chick-fil-A, 4,406; then Starbucks (Would you consider Starbucks a fast food restaurant?) 3,267 and last with 3,204 Facebook “likes” is Steak’ N Shake.

Seattle To Fine Consumers’ and Business’ For Food Rubbish. Seattle’s recyle goals are among the most aggressive in the U.S. The City wants to recyle 60% by 2015 and 70% by 2020. To help ensure these goals are met, the City Council unanimously passed an unusual ordinance. When Seattle garbage collectors see, what looks like more than 10% of trash of compostable items they’ll issue fines to offenders.