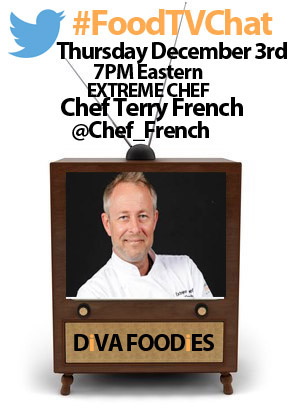 Diva Foodies is excited to announce that #FoodTVChat with Chef Terry French, aka The Rebel Chef, will be this Thursday, December 3rd at 7PM Eastern. And of course you know that with a guest chef with a name like The Rebel Chef, this #FoodTVChat will be unpredictable in the very best possible way!

According to Chef Terry French’s Facebook page he has been known as The Rebel Chef for almost a decade because he does not adhere to convention in his cooking. And that applies to his style of cooking as well as the location of his cooking! Chef French is “all in” whether it is an exotic dish or an exotic location. His culinary point of view, Extreme Cuisine, was perfect for Food Network’s Extreme Chef and he totally rocked Season 2!

Check out this video and you will get a taste of Terry’s passion and sense of adventure.

Chef French was born in Evansville Indiana and grew up in a cooking family. His father taught him how to hunt and fish and Terry eventually spent nine years as a tournament fisherman, nine years as a first mate on a sport fishing boat and is a United States Coast Guard licensed captain. He graduated from Scottsdale Culinary Institute apprenticed in continental, European and Asian cuisine. He also served two world tours in the U.S. Navy.

Chef French owns a catering company, Culinary Dreams and you can check out his upcoming events on his Chef’s Roll page.