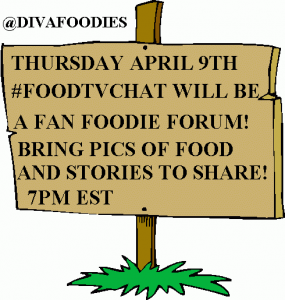 Our first Diva Foodies #FoodTVChat Open MIC was a blast! The time flew by with lots of great discussions about who, what and why we love our Food Tv.

If you didn’t make it this week, we are planning to do a #FoodTVChat Open MIC on a regular basis, maybe even once a month. In the meantime, below are some of the highlights from last night’s #FoodTVChat where it was all about YOU and FoodTV.

My faves… Chopped, Extra Virgin, Cook's Kitchen/Test Kitchen, Mind of Chef and anything with kids. #foodtvchat

@LeftofStr8 I love your tweets from #chopped with your ideas about the mystery basket. I'm like the deer in the headlights ! #foodtvchat

A lot of my inspiration for consulting and auditing comes from feedback that chefs get on various shows. It helps. #foodtvchat

My leftover Easter bread made some fantastic French today the next day w vanilla #foodtvchat pic.twitter.com/NufuMEeBtK 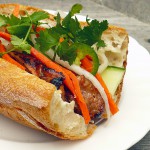 My current item is trying to figure out how to make a good Banh Mi at home, #foodtvchat

My final words are dont confuse Passion with Perfection, we are not going to get it right everytime, but keep trying #foodtvchat

You can follow the entire #FoodTVChat here. And join us on Twitter next Thursday and every Thursday at 7PM Eastern for #FoodTVChat.