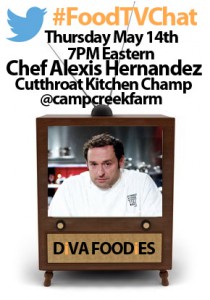 This week, Thursday May 14th at 7PM Eastern,  #FoodTVChat welcomes Guest Chef Alexis Hernandez, a Cutthroat Kitchen Champ and the Executive Chef and Owner of Union Hill Kitchen near Atlanta. We can’t wait!

Chef Alexis is from Union City, New Jersey and says that The Betty Crocker Cookbook was his first “go to” cookbook for techniques and ingredients. Sounds retro and classic to us!

He graduated with a BA in Theology from the Moody Bible Institute in Chicago and then began a corporate career. He eventually left his corporate job and moved to his 65 acre family farm where he studied farming without the use of chemical pesticides and learned about agriculture from the local farmers.

Im at our farm! Our pear trees and chives and oregano are teaming! pic.twitter.com/xRCNPGvj71

A passion for cooking led him to acquiring a culinary degree from Sullivan University’s National Center for Hospitality. He is dedicated to “fully understand the science of cooking that has been lost in America.” and to “understand{ing} the logic of how ancient cultures grew their food efficiently and safely.” He is committed to “healthier eating for a healthier life.”

Shortly after graduating from culinary school he became a finalist on Season 6 of The Next Food Network Star. He later appeared as a contestant on Food Network’s Cutthroat Kitchen and emerged as champion.  We are looking forward to hearing ALL about Cutthroat Kitchen on #FoodTVChat Thursday! 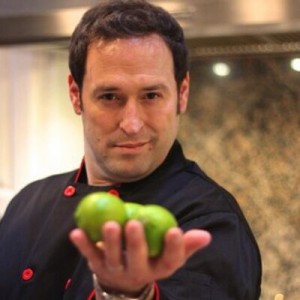 So, please join us on #FoodTVChat, this Thursday May 14th at 7PM Eastern for a sure to be entertaining time with Chef Alexis Hernandez.