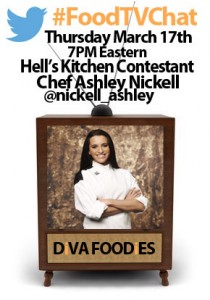 Right now on Hell’s Kitchen, Chef Ashley is not saying a word while her fellow Red teammates blame each other for their disastrous performance! We will definitely have to ask her about this episode that truly lived up to the name Hell’s Kitchen.

So, here’s a little more info about Chef Ashley to get you ready for Thursday night’s #FoodTVChat with Chef Ashley Nickell–

Chef Ashley was born in Ohio and says she has been cooking since about the time she learned to walk. She currently lives in Orlando Florida and is Chef de Cuisine at one of her family’s restaurant, Funky Monkey Wine Bar and Bistro  on International Drive. She is getting ready to open her own restaurant in downtown Orlando called Restaurant Ash. Chef Ashley describes Restaurant Ash as a fast casual restaurant and it will be open for lunch, dinner and late night. The Facebook page for Restaurant Ash is here and the food looks yummy! (Yes, I love Reubens and this one looks extraordinary!) 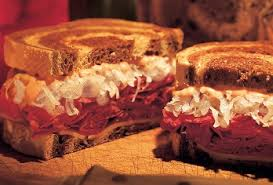