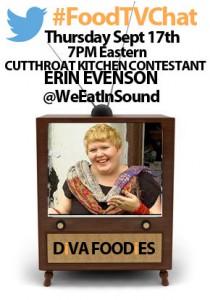 #FoodTVChat is excited to welcome Cutthroat Kitchen contestant and über food contest competitor Erin Evenson as our Guest Chef. #FoodTVChat with Erin Evenson will be tonight, Thursday September 17th at 7PM Eastern. You will definitely want to drop in—I mean how many people do any of us know who have “built” a $100,000 burger?? And then, turned right around and competed on CutThroat Kitchen and cooked at a James Beard Foundation dinner!? 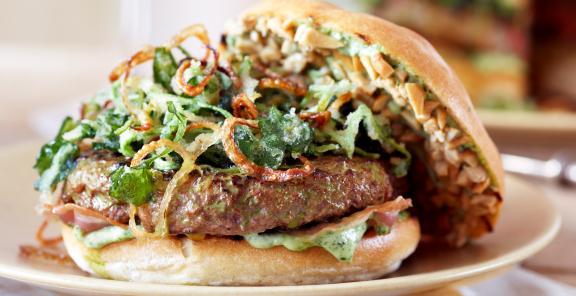 This is my tribute to this culinary wonder on a bun, with a sweet and spicy green-curry glaze, a little nugget of salty pancetta, creamy minted basil aioli, the crunch of roasted cashews, and a tangle of that beautiful, mythical watercress salad.

Heat a gas grill to medium-high.

To make the glaze, combine all of the ingredients in a blender and blend until completely pureed. Pass the mixture once through a sieve to remove any errant chunks, cover, and set aside.

To make the aioli, combine all of the ingredients in a food processor and process to a smooth paste. Transfer to a bowl, cover, and refrigerate until assembling the burgers.

Place a large, high-sided, cast-iron skillet on the grill rack. Add the pancetta and cook until crisp, 7 to 8 minutes. Transfer to paper towels to drain and pour the fat from the skillet into a large bowl; reserve.

To make the salad, return the skillet to the grill, add the canola oil, and heat until shimmering, about 325 degrees F. Combine the flour, seltzer water, baking powder, salt, and pepper in a large bowl and whisk to blend well. Add the watercress and stir to coat.

In a small bowl, whisk together the lime zest and juice, vinegar, fish sauce, sugar, and hot sauce until combined. Set aside.

To make the patties, add the chuck to the bowl containing the reserved pancetta fat and combine using your hands. Form the meat into 6 equal patties that are slightly larger in circumference than the buns.

Grill the rolls, cut side down, until they are toasted lightly. Place the cashews on a plate. Spread the cut sides of the rolls with the aioli and dip each roll top, aioli side down, into the cashews, pressing gently to make sure that the nuts adhere.

To assemble the burgers, combine the fried shallots and watercress in a large bowl and toss to combine. Drizzle the lime dressing over the mixture and toss again. Place a pancetta slice on each bottom bun, followed by a patty. Place a mound of the watercress salad atop each patty. Finally, add the cashew-crusted bun tops. Serve immediately.

Ok, so here is a little more about Erin Evenson so you are ready for #FoodTVChat tonight!

Erin is a Brooklyn New York native who is passionate about being a home cook, and no wonder! Besides winning the $100,000 Sutter Home Build a Better Burger contest she has been invited to cook a James Beard Foundation dinner and been  a contestant on Cutthroat Kitchen, Season 2 Episode 4, “The Yolks on You” and has been competing since 2006.

Erin’s cooking is Scandinavian inspired by her family heritage, made extraordinary through her own special passion and dedication.  Learn more in this video.

We are happy that Erin has been a frequent participant in #FoodTVChat but tonight were excited that the #FoodTVChat spotlight will be on Erin Evenson! Join us tonight at 7PM Eastern/6PM Central with your questions for Erin. She is a delight!