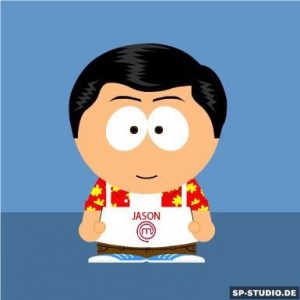 #FoodTVChat is so excited to welcome Master Chef Finalist Jason Wang as our guest host on Thursday September 7th at 7PM Eastern/6pm Central.

With just 5 episodes remaining Jason is among the top five chefs remaining and a strong contender to win it all. You won’t want to miss #FoodTVChat with Jason Wang for your opportunity to hear his story and get to know this talented chef a little better. And of course you won’t want to miss the 2 hour Master Chef tonight, September 6th, 8E/7C. This will be the last Team Challenge of the season.

To help you get ready for #FoodTVChat with Jason Wang we want to tell you a little bit more about Jason and how he came to be such a strong contender on Master Chef Season 8. You might also want to watch this clip of Jason’s appearance on Boston 25 Morning News where he prepared his apple walnut cake and talked about his experiences on Master Chef.

Jason is a native of Newton Massachusetts. He graduated from Cornell University and has a Masters Degree in Music from Boston University. He is a classically trained musician. By day he teaches music and conducts the orchestra at Newton North High School; by night he sings professionally all over the city of Boston for Boston Lyric Opera, Boston Baroque  and Odyssey Opera among other venues.

Lately he is also adding some food pursuits to his schedule. If you are going to be in Boston on September 12th, Jason will be cooking a 5-course dinner with wine pairings at the South End Buttery. Details here.

Jason’s love of cooking began at home. Early on he began helping his mother prepare the family meals. His mother is a nutritionist and an exacting teacher and Jason obviously learned well! He also credits the diversity of Newton to exposing him to a variety of cuisines that also furthered his food education.  As we have seen on Master Chef, Jason is VERY creative in his cooking and plating, creating a “symphony on a plate.”  He says he has always been a visual person and equates blending different flavors and ingredients like different instruments in a symphony.

Jason’s friends encouraged him to audition for Master Chef at a Boston open casting session in April.  He says he never expected to be chosen but of course we can see why he was! You can follow Jason on Twitter, Facebook and Instagram. And please join us for #FoodTVChat with Jason Wang Thursday September 7th at 7PM Eastern/6PM Central and 4PM Pacific.

Thanks to Katie for creating the awesome cartoon image of Jason!