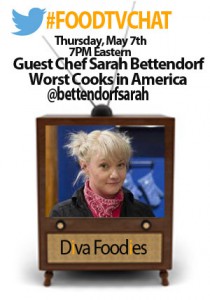 Foodies, would you be willing to tell the world that you are one of the Worst Cooks in America? Tonight’s #FoodTVChat Guest Chef Sarah Bettendorf did just that on Season 6 of Food Network’s Worst Cooks in America. She will be telling us all about it at 7PM Thursday May 7th (that’s tonight) so sign in (#FoodTVChat), kick back and join in the fun!

Sarah is from St. Cloud, Minneapolis and graduated from St. Cloud University with a degree in art education. Her brother Ted Norris III, an executive chef, nominated Sarah for Worst Cooks in America who noted that while Sarah lived with him he “watched her become the only person to ever cook ramen noodles in a pile of dough.”  Hard to do!

While Sarah’s mother and brother are trained chefs she was apparently more interested in the arts than the art of cooking. Her motivation for competing on Worst Cooks in America according to Food Network was to “learn to cook a meal for her significant other and to show her brother that she could cook.”

Her time on Worst Cooks in America and her mentoring by chefs Tyler Florence and Anne Burrell was well spent. 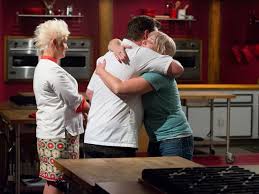 Sarah notes that she has “gotten a lot better at following recipes.  Well, sort of. I still go off the recipe train sometimes.”

We feel pretty confident that this #FoodTVChat with Sarah Bettendorf will be a blast but join us and see for yourself!