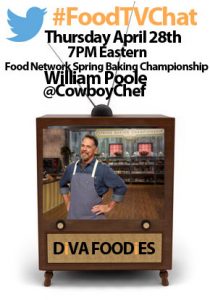 Can we just say how excited we are for #FoodTVChat with William Poole the Cowboy Chef from Season 2 Food Network’s #Baking Championship this Thursday, April 28th at 7PM Eastern?

Well, we are very excited to welcome Will as our guest chef because not only is he an awesome chef, he is one of the most multi-talented, interesting chefs we have ever spoken to. And you won’t want to miss your opportunity to meet him yourself on #FoodTVChat. And to help you think of things you want to ask him, here’s a little bit more about him—

Will was born in Nebraska into a family that provided the background for his future endeavors. His immediate family worked in the construction business and his grandmother worked for Brach’s Candy; hence he learned all about restoring old buildings and fell in love with the art and science of confectionary making at an early age. His parents also apparently knew their way around the kitchen so their influence contributed to his interest in cooking. In the days before Food Network he would come home from school and  watch Julia Childs and Jacques Pepin on PBS and their instructions became his early culinary education.

Moving to Denver he worked in construction by day and landed a job as a pastry chef on the side. The latter experience prompted him to pursue a more formal culinary education so he enrolled in the culinary education program at the Art Institute of Colorado. He then got the opportunity of his life to date-to work on the American Orient Express as the pastry chef.

When his train journey came to an end he began single-mindedly pursuing his passion for pastry and confections. This passion took him to New Orleans, Oregon, Kentucky and back to Denver. It was in Denver when Will was the owner of Wen Chocolates that he first appeared on Food Network.

Jamie and Bobbie Deen caught up with Will at Wen Chocolates while in Colorado for their Food Network show Road Tasted and did a feature on Will’s “amazing and unique chocolate truffles”. Will showed them how to make two of his truffles, the Savannah Truffle that is infused with four different peppers and his Mint Julep Truffle. YUM!

When his partner accepted a job in Boston Will closed up his Denver chocolate shop and settled in rural New Hampshire where he started Porter Hill Sweets. What’s he up to at Porter Hill Sweets?  According to his Facebook page he is “continuing on the path to offer small batch, flavorful and hand-crafted chocolate bars, toffees and other candies that have, or tell a story.” Intriguing, right? You might want to like his Facebook page right now so you can be among the first to hear about his latest chocolate creations! Also follow him on Twitter. 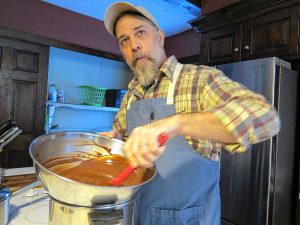 And of course join us Thursday night at 7PM Eastern for #FoodTVChat with William Poole. We can’t wait to hear all about his experiences on Food Network Spring Baking Championship as well as what the future holds for the Cowboy Chef. Come to think about it, we want to hear more about how he got the name, the Cowboy Chef!