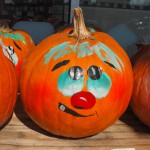 Let’s be honest,  despite the fact that everything imaginable seems to be available in pumpkin spice flavor, Halloween and Paleo do not easily go hand-in-hand.  Of course pumpkin itself makes everyones’ Paleo acceptable list, as do pumpkin spice ingredients cinnamon, ginger, allspice, nutmeg and cloves.  But all of the pumpkin spice products that we are currently drowning in have little to do with Paleo or healthy. So, we have curated a list of the 7 best Halloween Paleo Tricks and Treats that we hope will help you and your family survive this week Paleo style.

As far as what to put in the dreaded bowl of treats for the costumed set that you are expecting on Friday night, fill it with candy! It’s not the night for Paleo guest lectures to your neighbors and their kids.