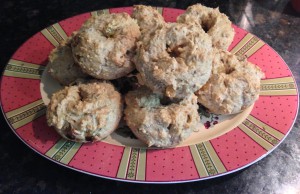 I understand about the bread thing. When I talk to people about going Paleo the number 1 thing I hear is the bread excuse. Yes, there are many excuses involving many well accepted dietary beliefs, e.g. a low fat  and high carbohydrates diet increases energy that have enabled our love affair with mouthwatering baguettes and buttery croissants. I wondered, was there such a thing as a no excuses paleo bread recipe?

I couldn’t imagine morning without a toasted bagel or warm muffin. And sometimes, you just need a big juicy cheeseburger on a bun. But, after reading Wheat Belly and Grain Brain I couldn’t imagine that giving up grains wasn’t at least worth trying. So, I decided to give it a shot. I began a search for Paleo recipes and cookbooks. There were many choices and I found some really great recipes.  I loaded up on almond flour, cider vinegar, coconut oil, sugar, flour, oil and aminos, and tossed the canola oil, wheat flour and refined sugar. I read labels closely with my iPhone in one hand to look up common ingredients that maybe are more common than necessary such as citric acid and calcium choloride. After a few months, the joint pain that I had suffered from for years was gone. And that alone (being pain free and not taking ibuprofen like Tic Tacs) made giving up grains worthwhile.

However, although I found many Paleo recipes that were as good or even better than non-Paleo recipes, it took a long time and lots of trial and error to have what I now consider a true no more excuses Paleo bread recipe. And although, I tried many almond flour bread versions, non of them really had the texture of bread. Until I stumbled upon one from Paleo Effect called correctly enough Paleo Fluffy Bread, A Grain-Free, Wheat-Tasting Sandwich Base. And so it was that I began the no excuses Paleo bread recipe journey.

2. Combine all dry ingredients. Then mix the wet and add to the dry until throughly incorporated. Spray or rub the muffin tine or bread loaf down with the oil. Bake muffins for 20-25 mintes or until a toothpick comes out clean or for a loaf, 30-35 minutes.

When I make it, I sometimes use Olive Oil instead of Walnut Oil and most of the time I add caraway seeds. And sometimes caraway seeds and golden raisins. There were two other bread recipes at Elana’s Pantry, one for Rye Bread  and one for Irish Soda Bread, that I tried looking for what I could call a no excuses Paleo bread recipe that gave me the idea of adding caraway seeds and raisins to the Fluffy Bread . Now, as I mentioned, it was the bread in the morning and the on a bun thing that was my own person challenge. In other words, I needed to come up with something with that fluffy, bread like texture that was functional. Enter the donut pan.

Below is the No More Excuses Paleo Bread Recipe, Version 2:

1. Beat the eggs and the egg whites together with a whisk

6.  Add 1/2 cup or more of golden raisins (optional)  if you are like something sweet for breakfast

For those of you using bread as an excuse for not trying a Paleo diet, try this recipe, original or version 2!  I can’t help you with pasta, the second most frequently used excuse but overcoming bread deprivation is a great start. Let us know if you have a no more excuse recipe to share.