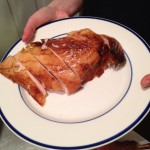 Thanksgiving is without a doubt my favorite food holiday and I will admit the reason is all about “the big three”: stuffing, mashed potatoes, pie.  Yes, Thanksgiving sits in direct opposition to my desire for a  grain free, low carb Paleo diet. So, with 2 more grocery shopping days left, I must face down the Paleo Thanksgiving conundrum: find some recipes that are so delicious that we won’t miss the beloved old standards or decide that one day out of the year won’t matter and just cheat! (Judge me, go ahead and judge me)

Now, of course part of MY Thanksgiving conundrum is that I should have personally tested out some recipes before now. There are plenty of  specific Paleo Thanksgiving recipes available on line as well as many Paleo recipes that are suitable for Thanksgiving. However, I think the very thought of replacing my beloved cornbread sausage stuffing recipe (actually The Silver Palate Cookbook’s beloved cornbread sausage stuffing recipe) put me into complete denial mode. The mode that leads you to wait until the past minute before making menu decisions. So, I have sifted through dozens of Palo Thanksgiving recipes and have identified some possibilities based upon how they looked, “sounded” and past experiences with the recipe authors.

So here is my list of the best Paleo Thanksgiving “replacement” recipes for the “big three”, by category:

Sweet potatoes as we all know are acceptably Paleo; it is the white, mashed potatoes with gravy that presents the real Thanksgiving challenge. However, I have included some sweet potato recipes that insure their Paleo-ness as well as some faux mashed potato alternatives.

So, these are the Paleo Thanksgiving recipes that I will choose from. How about you?