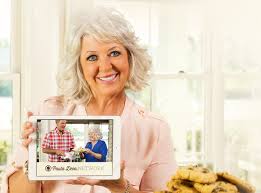 Paula Deen, former Food Network Celebrity Chef, currently relaunching herself as her own 24/7 online network has acquired rights to all 440 Food Network episodes including her 13th season episodes that were never released following her termination from the Food Network in June 2013. The amount that Paula Deen paid to buy the rights to her Food Network shows for her video channel was not disclosed. That number would be an interesting metric to determine the value Food Network places on Dean’s TV assets and thus their take on the future of their former celebrity chef.

The Paula Deen Network launches Wednesday, September 24th and Paula Deen will return to the Today show for an interview with Matt Lauer on Tuesday. You may recall that she was last seen in tears on the Today Show in the middle of the scandal over her history of using racial slurs in what was considered one of many PR fiascos in her effort to halt the demise of her reputation and brand. One can only wonder if  Paula Deen will heed any of the unsolicited advice on crisis communications that was widely published following the 2013 scandal that seemed to worsen with every interview, Tweet or YouTube video or supposed solicited advice before tomorrow’s Today show appearance. Even though Paula Deen’s new strategy is based upon “converting the millions of fans she has amassed on social media into subscribers” she will still need positive word of mouth and favorable reviews from network TV appearances to successfully launch the Paula Deen Network.

Judging from her own online videos promoting her new network (see below) that begins with a drawling Deen gushing “Guess whose goin’ digital ya’ll?”  she is targeting her online efforts directly at a “mainstream” fan base impervious to “political correctness”  and this part of her strategy seems to make perfect sense. These are the fans  (6 million social network fans and 1 million email subscribers) who might just pay $8 or $9 dollars a month to have “all of” Paula Deen 24/7.

In recent interviews regarding the launch of her new network, Deen says she now considers herself free from the creative and financial control of network bureaucracy and “if we disagree on something, we can discuss it right then and there. We don’t have to put it before a group in a tall building somewhere. We can discuss it right there. It’s as real as it gets.”

These quotes indicate that Paula Deen still doesn’t  accept much blame from her 2013 fall from grace that was driven as much by her own attempts to discuss her past mistakes “right then and there” then her past racially insensitive behavior . However, with a $100 million backer who apparently also believes that Deen can connect with an online paid subscriber audience and re-build her brand it might not matter.