There are restaurants that you pass as you run errands, meet up with friends and are on your way to other places. As you drive by you think, “Oh yes, must remember this one next time.” Stoney River Steak House and Grill was one of those restaurants for me. When I received an invitation from Table Top Media Group to experience a blogger’s tasting meal at Stoney River how could I say no?

This is a sponsored post in partnership with Table Top Media Group. The entire meal was complementary, however all opinions are those of the author.

The day after Valentine’s Day seemed like the perfect time for a special Girls Lunch Out. One of my BBFs, writer and foodie Mary Welch McGill, agreed to join me in a celebration of friendship. We headed north on I 400 which was a short drive to the metro Atlanta community of Roswell, GA. 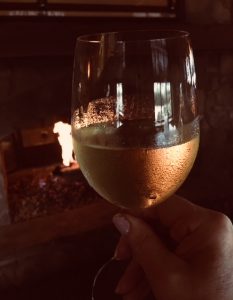 Stoney Rivers _ Wine by the fire

Walking into the restaurant we found ourselves in an open floor plan where fireplaces brought a sense of coziness to the space. Manager Veronica’s friendly smile and manner set the tone for what was to be a fun lunch experience. The day was gray and drizzly so we really appreciated our table next to the fireplace. Server Lauren took very good care of us and was extra patient as Mary and I looked over the menu in between girl talk!

Veronica explained everything was made in-house including the breads and desserts. We looked forward to a divalicious dining experience!

Yes. It was wonderful and Veronica (mgr) and Lauren (server) made us feel extra special. ? Thank you @stoneyriver @TabletopMediaGp pic.twitter.com/CcxiYHDIwF

Oh where to begin! With offerings that included crab cake, steak rolls deviled eggs with sugar cured bacon I could easily have turned the Starters into a tapa type meal.  However, Mary and I decided to to split two of the dishes recommended by both Veronica and Lauren. We settled on calamari with a a marinara sauce. As calamari lovers well know an extra few seconds in the fryer can turn this protein from tender to chewy. Would the chefs at Stoney River be up to the challenge? Yes! they were indeed.

We then turned to the tuna stack. This dish has multiple layers of tuna, avocado and mango salsa and served with tortilla chips. If you’re looking for a lighter appie to begin your meal think tuna stack! 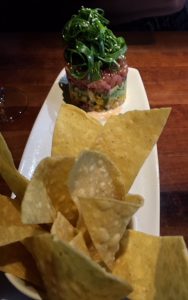 Soups & Salads were next up. Mary chose the salad and I the soup.

Mary really wanted to taste the baby kale salad with toasted almonds and dried cranberries. Side note: I think I must be one of the few people who are not enamored with kale. But I’m willing to try most anything. Could Stoney River make a kale salad for a non kale lover?  I must admit I was pleasantly surprised. The dark greens were so pretty against the white plate.

As our chef pals tell us, “You eat first with your eyes.”

The drizzle of an herb vinaigrette gave the dish a bit of a nice tang.

New England lobster bisque sang out to me at first glance. I grew up in Boston and I’ve eaten my fair share of lobster. However lobster in any form is still a big treat. Mary grew up in New England too. “Shall we see if Stoney River is up to lobster bisque for two from New England?” I asked my friend. Mary’s grin was nothing short of mischievous. So we ordered.

The hint of sherry was a wonderful complement to the very rich lobster flavor of the soup. The actual pieces-you-could-see-and-taste of lobster meat made this a winner for both of us.

Entrees. Although the menu included entrees like paneed pecan trout and bistro chicken, Stoney River is known for its hand-cut steaks. It didn’t seem right for us to leave without tasting a steak. Mary ordered prime rib of beef ~ that was perfectly cooked and seasoned. By the way Stoney River has a its own special blend of seasoning.

The coffee-cured filet mignon that was cured in a blend of coffee, brown sugar and molasses was calling my name. Truly I could hear it a little voice saying ~ choose me choose me Toby! So I did.

Lauren encouraged us to try a side dish. I ordered roasted brussel sprouts and Mary had sauteed spinach. The sprouts were crispy and a nice dish to accompany the filet. The spinach seemed to be dressed in a lemon sauce that was a bit over the top for us.

Just for giggles we ordered ratttlesnake pasta! If you haven’t tried this southwestern dish rattlesnake does taste much like… you guessed it — chicken. The pasta was really cheesy and was a nice way to serve this exotic dish. 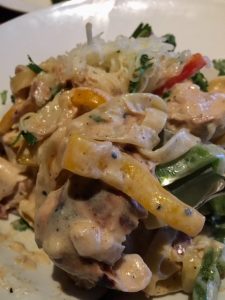 Desserts. Desserts. Desserts. What is a Girls Lunch Out without a sweet ending? After much thought about this very important decision, we ordered key lime pie and creme brulee. The pie had just the right lime to balance the richness of the filling. 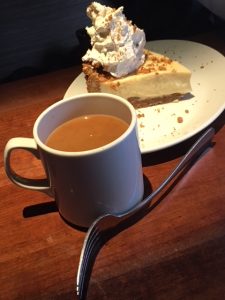 Is there nothing as wonderful as the anticipation of breaking into the golden caramelized sugar crust of a creme brulee? 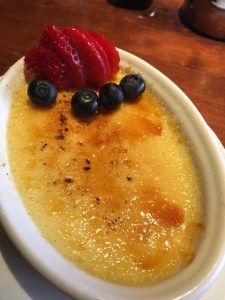 As Mary and I made our way back to Atlanta we agreed Stoney River was a delightful surprise and a wonderful way to spend a special Girls Lunch Out! Our thanks to Veronica, Lauren and the staff at Stoney River for their hospitality; and also Kristen and Quinn from Table Top Media Group. 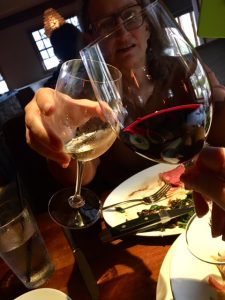