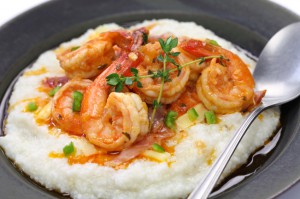 Growing up in Boston, where each turn on the cobblestone streets led to a new food surprise was something I took for granted. My dad was the adventurous eater in our family and his love of trying new foods was passed along to me.

We explored the mysteries of Boston’s Chinatown. We walked the streets of the North End eating thin sliced gooey cheese pizza served on pieces of waxed paper … without a fork or knife! I didn’t know people ate pizza with utensils for many years. Our special daddy-daughter date introduced me to my first French restaurant and was the start of a life long love affair with French food.  How grown-up I felt sitting in the little basement, bistro on Newbury Street.

Several years ago I moved to Atlanta and was excited to explore southern food. Although the food scene in ATL is exploding with young chefs doing innovative work, I quickly learned there are certain foods that one is suppose to like. Like grits. However, try as I might, I just couldn’t get past, what seemed to me, a very odd texture.  Whenever I think of grits I can’t help but remember the scene from My Cousin Vinny when Vincent Laguardia Gambini, played by Joe Pesce, and his girlfriend Mona Lisa Vito, played by Marisa Tomei, first encounter a grit. Not unlike my own experience I must admit.

It was the stone ground grits at West Egg Café, a small funky Atlanta West Side restaurant known for techie power breakfasts, that converted me. The grits were thick, creamy with a hint of garlic. Definitely an omg experience that I repeated several times. Along the way I discovered that grits are not only for breakfast. Shrimp and grits have become one of my all time favorites.

Thinking outside your food comfort zone can take you to some interesting places. Some you’ll never want to see again but others you’ll want to come back to again and again.