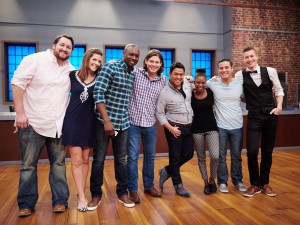 Week 10 seemed like a good time to continue our Twitter Review of Food Network Star as we countdown to the finale on  August 16th with the addition of Dom Tesoriero back into the competition. Right, Dom, whose cuisine had shone the brightest throughout the weeks according to Bobby Flay; but who had remained camera challenged won Food Network Star Salvation. Now he will be going head to head with series standouts Jay Ducotte (Guest Chef on Diva Foodies #FoodTVChat on 9/3/15) and Eddie Jackson to be the next Food Network Star.

And, yes, this is a review of YOUR Tweets during Food Network Star so we try to keep our own opinions to a minimum … but we do have a few observations we would like to share. First of all,  it has seemed from the beginning that the next Food Network Star was not going to be a woman and watching Star Salvation last night confirmed it.

Additionally, the format announced for the finale pilot challenge is Food Network’s current favorite template based on the successful Diners, Drive-ins and Dives hosted by Guy Fieri. We’re wondering why the pilot is not the stand and cook type of show that requires original cooking talent of the host. So, a couple of comments to this point—Dom’s strength is cooking not talking. Why move Dom to the final three compete in this type of show? Several chefs of the female persuasion in Star Salvation could have really rocked it in this format, right?

We ask — Food Network, does every new show your produce have to be in a  Triple D format?? What a waste of Michael Symon’s talents to have him imitate Guy Fieri’s every nuance in Burger’s Brew and ‘Que! This Diners and Dives meets Best Thing I Ever Ate script is getting boring. We ask — Food Network, why even bother with the cooking part of the competition for the next Food Network Star? We were not alone in this POV. Here’s what the Twitter community has to say …

Why did they spend 9 weeks judging their food if the pilot was just a triple D rip-off.. I miss cooking shows #FoodNetworkStar

No matter how cool the host is (and Eddie is cool!) I can make restaurant reservations myself. Somebody cook something. #FoodNetworkStar

OK, now, without further ado, here is our review of your Food Network Star Week 10 Tweets.

OK, what was your consensus regarding Star Salvation and the return of Dom? Well Dom has a lot of fans!

But there were lots of mixed feelings.

Who has mixed feelings about #FoodNetworkStar??? to the return of @ChefDomTes & the top 3. But the pilots all seem the same w/no cooking!???

And of course many of you thought Giada had a preference for Dom from the beginning.

@FoodNetwork #FoodNetworkStar was a sham with that #starsalvation @GDeLaurentiis wanted Dom and she got him. Want be watching again!

Many of you thought that Arnold should not have been eliminated

Arnold! Nooooooo! He had ONE off day. It's not fair. He was always my favorite. #FoodNetworkStar

And Rue had many supporters

@FoodNetwork has an obvious Italian bias. @arnoldmyint and @RueRusike should have landed pilots before Dom #FoodNetworkStar

But most were satisfied that Matthew Grunwald did not return to the competition.

Overall, most of you agree that Jay Ducote and Eddie Jackson deserve to be making pilots!

Finally finished #FoodNetworkStar for the week. Pumped that my favorite 2 guys from the beginning have made it to the finals! Go Jay & Eddie

Let us know if we missed anything!