So many interesting happenings in food and drink .. so  little time to find them! Diva Foodies does it for you. We go ’round the digital world for the best and most interesting news in food and drink. Some are fun stories, others are important trends. This week we’re highlighting yet another entree into the wonderful world of bacon, designer food inspired accessories, new products from KFC (Kentucky Fried Chicken) for the India market, urban farming and job-training in hyper-local food production from a New York agency established in the 19th century and an interesting egg gadget from Korea. 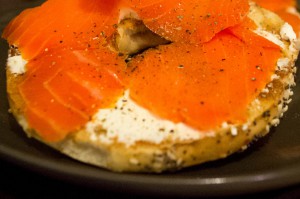 Cream Cheese, Lox and Bacon On A Bagel. Kraft has gotten on the bacon band wagon with its newest cream cheese  Seems adding bacon to cream cheese is a tricky proposition. It took Kraft 18-months in R&D before they were ready to go-to-market. Perhaps a Bacon Bloody Mary would complement at your next brunch.  Heather, from girlichef blog, has a great recipe.

Food Beyond Breakfast, Lunch, Dinner to Food Fashion. Check out this cool gallery created by Elle that highlights how some of the top designers use food concepts as inspiration for their accessory lines. How about a  Kate Spade Shanghai Cruz Bag or an Anya Hindmatch Imperial Frosted Flakes Printed Snakeskin Clutch or  Moschino Gummy Bear Couture Satin Sandals?

KFC Opens India Market. Kentucky Fried Chicken heads to India with a vegetarian menu and a new tag line … So veg, so good. “We recognized an opportunity to deliver a significant vegetarian range for the Indian consumer, and to reach out to a broader target audience.” – Dhruv Kaul, director of marketing at KFC India.

Henry Street Settlement Goes Urban Farming. The Henry Street Settlement was established in the 19th century to enrich the lives of the Lower Eastside (of New York) residents. A hydroponic greenhouse is being build on the roof of its 301 Henry Street building. The greenhouse will support job-training and education programs about sustainability. But the benefits don’t stop there. The hyper-local food produced will be used in the agency’s meal services.

Korean Egg Gadget. Who doesn’t need a new food gadget? This one seperates yolks from whites.