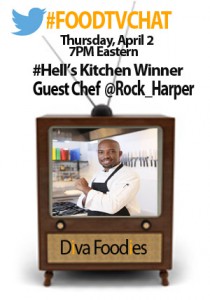 We are really looking forward to #FoodTVChat Week 4 when our Guest Chef will be #Hell’s Kitchen winner Rock Harper. 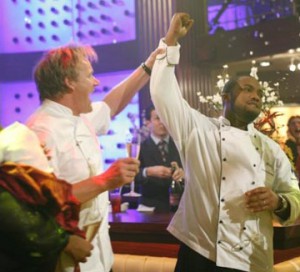 Please join us on #FoodTVChat at 7PM Eastern, Thursday April 2nd. Of course Tad Hamilton will be co-hosting so we know the discussion will be lively and unpredictable!

Chef Rock Harper earned a culinary degree from Johnson & Wales University and has showcased his many culinary talents in positions at award winning restaurants including Café Calliope, Burke Station Restaurant, Planet Hollywood, BET on Jazz Restaurant, and Executive Chef of B.Smith’s Restaurant, Ben’s Next Door and The Carlyle Club. He is the author of 44 Things Parents Should Know About Healthy Cooking for Kids. Rock has been the National Celebrity Chef for the March of Dimes since 2008.

Rock’s life changed when he was cast in and won the 3rd Season of  Gordon Ramsey’s Hell’s Kitchen.

We can’t wait to learn more about Chef Rock Harper on Thursday, April 2nd at 7PM Eastern on Week 4 of #FOODTVChat. We will be looking for you!