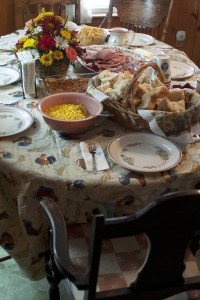 Food plays a role in creating family memories through out the year … not just on Thanksgving or holiday celebrations. For some families Sunday afternoon dinner is when aunts, uncles, cousins and family friends congregate at that special home where life slows down for just a few hours. Okay, so there may be some disfuntional stuff happening but it’s familia!

No matter what the menu holds there are always the must have favorite foods. The foods which are as ordinary as mac and cheese bring more than just familiarity…they create do you remember when memories.

When I was a little girl family night was Friday night at Grandma’s. The world agreed that Ida Marder was The Best, if not one of the best, cooks in the neighborhood … which was my world.

Walking into Grandma’s house on Shabbat we were greeted with the yeasty smell of freshly baked challah. Is there nothing more wonderful than hot out-of-the-oven homemade bread in any culture? Although the traditional, braided bread was the star of the pre-show (yes, looking back it certainly was at least a three act play!) sitting beside it was a small loaf baked just for my sister Susan and me.

The first act…er course…always began with the sweetest chicken soup. Pieces of orange carrots and luchen/noodles floated in our bowls. It was a perfect way to begin a meal that was comforting and familiar but at the same time always special.

Some childhood memories are more vivid than others. I remember a time when I was feeling miserable from a bad cold or the flu. I must have been about five. All I wanted was Grandma’s chicken soup. So of course, Grandma made some just for me because that’s what Grandma’s do. Dad brought it home in a big glass jar. Mom served it to me in bed on a tray. I must admit I was feeling pretty special.

Here it was Grandma’s chicken soup to make me feel better. I dipped my spoon into the bowl for that first long awaited taste. Something was missing. It didn’t taste the same. I tasted it again. It was fine. Nothing was wrong. Perhaps it was my cold that had dulled my taste buds mom said. I didn’t know. What I did know was it was a huge disappointment. 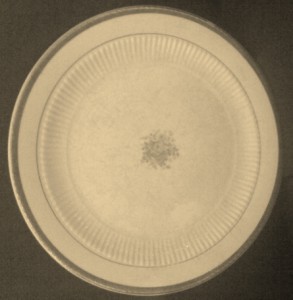 It wasn’t until years later that I realized what was missing. The Singing Bowl. Grandma’s dishes had ridges on the inside of the plates. When my sister and I ate soup we would run our spoons over the ridges and the bowls would “sing.” Food memories go beyond the taste or smells or even the circumstance. Sometimes it’s something as simple as a bowl that soup is severed in that stays with us our whole lives long.