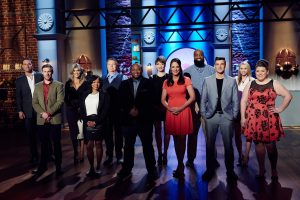 Aaron Crumbaugh @Homecookchi – Aaron spent time working on his grandparent’s farm when he was a kid; we’re betting he probably understands farm-to-table cooking. Will it give him an edge on Star? Or will his reality TV experience being on-camera help him combine delicious food with personality? Chef was a contestant on Food Network’s Cutthroat Kitchen and he and his wife were on the Amazing Race. Chef Aaron is living in Spokane, WA where he runs a catering company.

Ana Quincoces @AnaQooks – Ana is lawyer who is also a ‘celebrity’ cook. She heats up the kitchen with her love of spicy Cuban food. Her many media credits include Bravo’s The Real Housewives of Miami. Ana is also a foodpreneur selling her own line of food products Skinny Latina® along with several Cuban cookbooks. In 2011, Eater.com voted her Miami’s hottest chef. Ana is from Coral Gables, FL.

Damiano Carrara @CarraraPasteries – If you think you’ve seen Chef Damiano recently on Food Network ~ you have! He competed on Spring Baking Championship Season 1. Damiano definitely brought Tuscan charm along with his baking skills to the party. Now we’re looking forward to seeing Chef compete with savory along with sweet. In addition to Spring Baking Championship, he was a Cutthroat Kitchen winner. Damiano is from Lucca, Tuscany, Italy. He’s living in California where he and his brother own Carrara Pastries in Moorpark, CA.

Erin Campbell @ – Food Network is bringing back another pastry chef. Chef Erin was the winner of  Holiday Baking Championship Season 1. She’s the youngest chef on the show and we’re betting she’ll be cooking outside of the traditional box er skillet. Growing up in CA Erin recently made her way to Woodbury, MN to manage the pastry shop Nadia Cakes.

Havird Usry @Fat_Mans_Cafe – Will growing up in the restaurant biz and a 3rd generation chef give Chef Havird VP Executive Chef of  Fat Man’s Mill Cafe & Catering an advantage? Chef’s culinary point of view is modern southern food. It seems Chef thrives on competition. We understand that Chef Harv was a four year letterman in soccer at Clemson and competes in Ironmans. Harv is from Augusta, GA.

Jernard Wells @ChefJernard – As a two time winner of one of Food Network’s most intense shows, Cutthroat Kitchen, Chef Jernard knows his way around TV food competition shows. Chef told us the most important most important advice he received about competing was – Always cook from the heart! As The Chef of Love we know he has that one in the can. Read more about The Chef of Love in an exclusive Diva Foodies interview and Twitter interview. Chef Jernard is from Atlanta, GA.

Joy Thompson @ – Joy followed in her dad’s food footsteps (dad operates a steak house) when she opened her own restaurant Southern Sisters Restaurant and Grille. The inspiration for the restaurant’s name came from her 4 daughters. In addition to the restaurant she owns Sprinkle of Sugar which specializing in wedding and custom cakes. Will Joy’s professional culinary experience in savory & sweet give her a head start in winning her own TV show? Joy is from Thomasville, NC.

Melissa Pfeister @Hot_for_Food – We wonder if hosting, producing and editing her popular YouTube food show “Hot For Food” could be the advantage that brings it home for Melissa with her own Food Network show? Or will it be her competitive sports background that gives her the edge? We think it might be the moxie she inherited from her grandmother! Melissa is from Los Angeles.

Monterey Salka @Monterey Salka – Monterey might be the coolest ‘BA’ chick chef Food Network has seen to date. As her tequila-spiked guacamole burger demonstrates she’s ready to take a risk and have some fun. But is it enough to win her The Show of her dreams? Monterey was on Cutthroat Kitchen Camp and is based in Nashville, TN. Chef was born in SoCal, raised in PA and was a sous chef in Manhattan before she moved to TN.

Rob Burmeister @SiChefRob – Rob is another Cutthroat Kitchen winner alumni. He calls himself The Culinary Renegade. But there is another side to this chef… he has a big heart as his work raising money for breast cancer demonstrates. His POV is international fusion with a hint of American comfort. Rob is from Staten Island, NY.

Tregaye Fraser @ChefTregaye – Although Tregaye was influenced by her grandmother’s farm fresh food, or maybe because of it, she has a repertoire of dishes from 24 countries. Her client list reads like a celebrity Who’s Who including President Barack Obama, the Prince of Saudi Arabia, rapper TI and reality star Lisa Nicole Cloud. But will her talents impress Bobby and Giada? Treygaye also competed on Cutthroat Kitchen and Guy’s Grocery Games, She lives in Atlanta.

Yaku Moton-Spruill @ChefYaku – Add one more Cutthroat Kitchen chef to the mix of season 12. Yaku says on his Facebook page,“I’m like the Jay-z of the kitchen. We both started out flipping chickens, mine just happen to be delicious.” At 6’9″ it’s not a surprise he played professional basketball but his dream of being a chef took him off the court to culinary school. Chef’s POV is comfort food with a Latin American twist. Currently Yaku is a sous chef in San Francisco.