QA: I’ve loved food & cooking forever but had no idea how my skills stacked up against other folks #curious #HowDoIMeasureUp #FoodTVChat https://t.co/JtYRX1C6Tv

QB: We all FREAKED OUT LIKE WHOA! Did you see all of us with red eyes bawling like children? SOOO happy for @ChefsLife97 😍😍😍 #FoodTVChat

QE: How close I became with all the contestants! Realizing how much I truly love food & cooking/how that brings people together! #FoodTVChat

By taking the time to make something to share w/ someone, you give them a part of yourself! That’s such a treasure!!! #FoodTVChat

QG: You have to put yourself in your food. We all have stories & heritages & experiences… #FoodTVChat

QI: Hoping they took away memorable images w/my artist’s eye for food & a sense of having tasted something beautiful made w/💗 #FoodTVChat

Jason generously stayed on #FoodTVChat way past the scheduled hour in order to answer everyones’ questions. It was so appreciated! If you would like to read the entire #FoodTVChat stream you will find it here. Be sure and follow Jason on Twitter, Instagram and Facebook.

We wish Jason as well as the other 5 finalists the best of luck TONIGHT, September 13th, on the 2 hour Master Chef semi-finale! 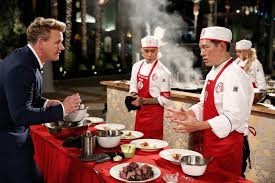