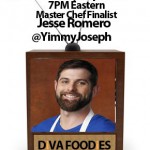 This season’s Master Chef was in our opinion the best so far but we do have one serious disappointment, Jesse Romero took off his apron way too soon. If like us you want to get to know more about Jesse join us tonight at 7PM Eastern for #FoodTVChat with Jesse Romero. And if his tweet below is any indication, the multi-talented “ragin’cajun” is raring to go!

7PM Eastern Tommorrow! #FoodTVChat. I will be answering questions and sharing stories from #MasterChef Season 6. pic.twitter.com/UMxF33ki4f

Petroleum Landman in Baton Rouge Louisiana  by day, Jesse currently showcases his culinary talents at pop-up restaurants and tailgate parties , often for charity, across the south. He recently teamed up with Food Network Star Season 11 Finalists Jay Ducote and Rue Rusike for a pop-up extravaganza in Baton Rouge at The Tin Roof Brewing Company that these travelin’ chefs called “Too Many Cooks”  .  We think this three would be just the right amount of cooks! It turns out that Jay and Jesse have been friends since childhood. Small world, right?

One thing that we have learned from all of our #FoodTVChats with the Master Chef 6 chefs is that the experience bonded them into friendships that have transcended the Master Chef series. We are hopeful that Jesse’s Master Chef and Food Network Star pals will join #FoodTVChat with Jesse Romero tonight just as they have joined in to support each other in many of the other #FoodTVChats.

So, don’t miss #FoodTVChat with Jesse Romero, TONIGHT at 7PM, Eastern. We expect to hear all about Master Chef, pop-up restaurants, LSU tailgate parties, Teal Team 6 and more from “all in” Jesse Romero. See you tonight!