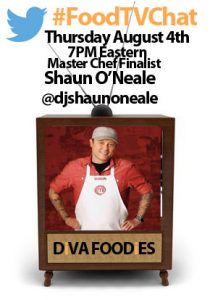 Tonight, August 4th at 7PM Eastern, we are excited to welcome Master Chef Season 7 finalist DJ Shaun O’Neale as our guest chef.  We are expecting an exciting chat with this self described “bass pounding, foul mouthed, tattooed, bad boy” who says he has been destroying dance floors across the country for over 10 years .  So we will be looking for you tonight at 7pM Eastern for #FoodTVChat with Shaun O’Neale. To get ready, below please find a little bit more info about Shaun O’Neale.

Shaun began cooking as a kid living in North Carolina where there wasn’t a lot of fast food ‘on the mountain’ as he put it.

About 3 yrs ago a trip to Italy changed his focus about food and how to cook it. Before if he was making pasta he’d throw everything into the dish. Now he looks for beautiful ingredients that can be the star of the show.

Shaun has his own garden and grows his own vegetables. He also likes to go to the farmers’ markets where he can get fresh ingredients from the local Asian markets. Fresh is very important to his cuisine!

Shaun’s showmanship personality seems like a natural to stand out on Master Chef and that he seems to be doing! He knew that succeeding on Master Chef would involve serious risk taking. He told us that you “can’t make it on this show without taking a risk.” You may recall when he broke down a whole fish and used all the parts? Yes, that qualifies as taking a risk!  Also the cake episode where he had a vision of what he wanted his cake to be but the ingredients were not in the pantry. He was able to improvise and to change his recipe on the fly. That is something that not everyone can pull off under the pressure of Master Chef!

Shaun was encouraged to try out for Master Chef by his friends so he sent in some tapes and scored a live audition in Las Vegas where he resides. After the judges tasted his food he was in!

So join us tonight, Thursday August 4th at 7PM Eastern for #FoodTVChat with Shaun o”Neale!