#FoodTVChat with the Firefighters of Master Chef 7 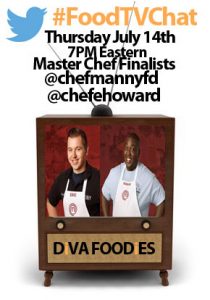 #FoodTVChat with the firefighters of Master Chef 7  is tomorrow, Thursday July 14th at 7PM Eastern and it is sure to be exciting. Eric Howard and Manny Washington have honed their respective culinary talents in conditions that might just be more stressful than Gordon Ramsey’s Master Chef kitchen—Eric in NYC’s Times Square Firehouse #54 and Manny in Orlando Fire Department Station 1″Big House” Engine 101 Hazardous Materials Team. We will definitely be sure to ask them tomorrow night on #FoodTVChat whether trying to please Gordon Ramsey or a firehouse full of hungry firefighters is more of a challenge.

Eric and Manny both come from firefighting families, Eric is third generation and Manny is second generation. Eric shared this photo of himself and his father at the firehouse. 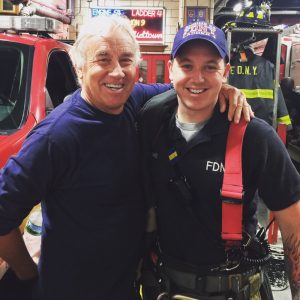 Manny’s father was a firehouse chef for the City of Miami and Manny says he learned a lot from him about the ways of the firehouse chef. Manny also found inspiration from his Grandmother, Georgia Bell and his mom, Sandra. Manny’s first #FoodTV competition was on Food Network’s Cutthroat Kitchen where he beat two other firefighters and took home the $25,000 prize.

Master Chef is Eric’s first #FoodTV experience but if you have been watching, you can bet it won’t be his last. He is passionate about cooking and he says that being on Master Chef proves that you can have more than one passion and more than one dream to follow. His advice is just to “go for it!”