Does high tech have a role to play in food?  Yes it does at #CES@2016! The place to be for tech gadget lovers in Januay is the Consumer Electronics Show. CES takes over Las Vegas and becomes a playground for techies. Next generation innovations are introduced to the marketplace, investors and potential partners. This year at CES you could find over 3600 exhibitors including those with drones, wearables, TVs, games and so much more.

We wondered… what about about high tech for the food? Since we didn’t attend CES2016 we turned to social media to find out what was hot, new and over the top.

In 2016 the health trend continues. With the Magical Gadget you’ll always know the nutritional value of your food.

You’re at grocery shopping and just know there is something you need to pick up for the recipe you’re making for dinner but can’t remember what. With Fridge Cam you can peek into your fridge and find out what might be missing from your list.

I mean, knowing what the food in my fridge is plotting next always keeps me up at night. https://t.co/rx32vejKWG #FridgeCam #CES2016

Phillips Connected Multi Cooker. It’s an app. It’s cookware. Wifi notifies of you of next steps in your cooking process.  It could be the best friend of contestants’ from FoodNetwork’s Worst Cooks in America show!

Talk to your food. SmartyPan’s sensor app lets you know about weight and temperature as well as nutritional information about the food you’re cooking.

The SmartyPans skillet can teach professional chefs a thing or two about cooking #CES2016 https://t.co/mGU5SPrLgP pic.twitter.com/WsJLI64lz5

Seems like a must for our BBQ friends! A bot that cleans your grill. Our question: who cleans the bot!?

We may not be Jetsonized quite yet .. but looks like it’s coming soon! 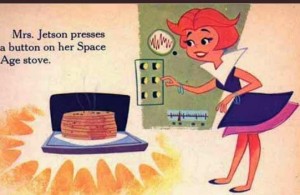 To end our peek into high tech cooking gadgets… a little low tech divaliciousness! What’s not to love?