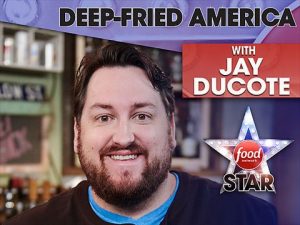 Jay Ducote is no stranger to Food TV fans. Jay was the runner up on Food Network Star Season 11.  Although Jay didn’t walk away with the grand prize of his own Food Network TV show, he did impress the judges and his fans that he could cook ~ indoors and out doors, had great on-air presence and fans loved him.

Now Jay is on a mission to demonstrate to Scripps Networks Interactive and its advertisers that he has the audience chops (pun intended) that will ensure his one-off pilot #DeepFriedAmerica can turn into a sustained TV series.

At the end of the day this is a business, and producing great content is only good if it can be sold to sponsors and advertisers. – Jay Ducote

In our Diva Foodies interview Jay generous shares his insights on Social TV, gives tips to chefs, especially TV chefs, on how to use social media to grow a brand and a fan-base, along with some of his Food Network Star back-story and more! Enjoy Jay’s Story.

Diva Foodies:  Not to be snarky, but there are so many food show on-air what makes #DeepFriedAmerica different and a must watch… in addition to the awesome host of course?

I’m going to be in the kitchen helping prepare (and eating of course) some amazing food, the caveat is that something in it has to be cooked in a deep fryer. But we aren’t just looking for normal fried foods, we are talking to chefs who are being more innovative and creating new dishes using the fryer.

Diva Foodies: The concept of Deep Fried America was taken from one of your Food Network Star show challenges. On Food Network Star you were positioned as the BBQ guy who developed his cooking skills from tailgating parties at LSU. Fried foods seems like a step in another direction. Why the fried food focus?

Jay Ducote, Deep Fried America: The short answer is because the Network loved it and wanted it. They pushed Eddie in the BBQ direction and had me go toward the fried foods.

To be fair, while I did some grilling on Food Network Star, I never really got to do any barbecuing or even make a version of my BBQ sauce. I tried to one time, but our groceries got swapped and Eddie ended up making the BBQ sauce instead (4th of July challenge).

On the culinary improv episode of Food Network Star I fried calamari and gave a line to live audience including people from the Network that being from Louisiana, anything that flies, crawls, walks, slithers or swims, we fry it. From that point on I think the Network liked positioning me as a fried foods guy.

All that being said, I definitely have a special place in my heart and stomach for deep fried foods. Fried Chicken would be on the plate if I got to choose my last mean. A beignet in Louisiana is the perfect breakfast. At tailgate parties you can rest assured that we had an outdoor deep fryer right next to the grill!

I knew right away that I would want it to focus on supporting local restaurants and chefs, but I had no idea it would grow into what it has become.

Diva Foodies: You have a fairly large presence in the digital and traditional media world beginning with your your blog Bite& Booze. Tell us a little about that that world.

Jay Ducote, Deep Fried America: I now speak of Bite & Booze not as a blog, but as a culinary media company. The website is still primarily a blog, but we also do a radio show (since 2011… in 2014 it won a Taste Award as the best food or drink based radio broadcast in the country), podcasts, video production, lots of social media stuff, events and more. 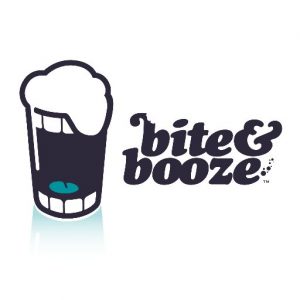 Diva Foodies: Bite & Booze is one of the longest running food blogs (launched in 2009). Will you give us a few tips on how to create compelling blog content that builds a loyal audience?

I don’t do a whole lot of recipe blogging, but has been part of my strategy. I support and celebrate the entire local food scene wherever I am from farmers to chefs and restaurants to people making cool products.

Diva Foodies: When doing research for our interview I came across an article from The Advocate. The headlined caught my attention.

How important will the social buzz be to impact the Travel Channel’s decision to pick up your pilot and why?

Jay Ducote, Deep Fried America: There are a couple ways to give Travel Channel good, immediate feedback on the show.

The first is for people to actually watch and set their DVRs to record the broadcast. The people in charge will see those ratings and get that data.

Secondly, social engagement absolutely helps. If @travelchannel is bombarded with tweets during the broadcast, they’ll know that not only are people watching, but they are also engaging. That’s powerful information for them to be able to take to advertisers who would purchase air time during my show.

So the social buzz will let Travel Channel and potential advertisers know that there will be engaged viewers if they pick the show up for multiple seasons.

At the end of the day this is a business, and producing great content is only good if it can be sold to sponsors and advertisers. 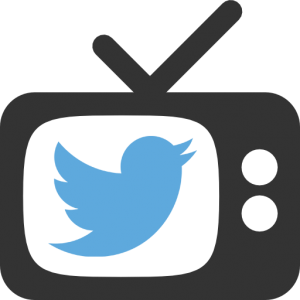 Diva Foodies: Let’s look at what is called “Social TV” on a more global basis.

Although Nielsen includes Twitter and now public Facebook into its TV ratings, in your opinion, to what extent do most producers/TV food media companies bring active social media into their digital marketing/out-reach mix?

(By active social media I mean, authentically engaging with the show’s fans versus broadcasting messages about the show or network.)

Jay Ducote, Deep Fried America: I feel like a lot of brands/people could truly be more active, especially when a show airs.

For pretty much every episode of Food Network Star last summer my team and I were live tweeting with fans during the episode. You never really see that from the big stars or the networks themselves. But I think they should.

The ability to now engage directly with fans while a show is airing is pretty incredible.

Doing it live can be pretty tricky for sure, but I find that it is worth it!

1. Social media gives everyone the opportunity to grow a brand in ways that weren’t possible before.

2.  It gives fans a chance to get an inside glimpse, connect with a personality or follow their journey

3. It also gives people like me a platform beyond the mass media outlets like TV or Radio.

4. So when it is done well, it is possible to build and retain a fan base outside of the traditional media outlets.

Diva Foodies: What are your thoughts about the benefits/importance of food TV personalities, chefs and contestants, live tweeting during their own shows?

Jay Ducote, Deep Fried America: I do it. It makes sense. It helps build and audience and grow a brand. It can be tough to make time for it, but it is so worth it.

Diva Foodies: In addition to blogs, you’re active on multiple social media channels and have been leveraging them to support Deep Fried America. How do you play to the strengths of, let’s say the Big 3: Facebook, Instagram and Twitter?

Instagram: Photos are key. Use pictures that resonate in one way or another.

Twitter: Inform and engage. Short format messaging. Connect with the audience by engaging in conversation.

Diva Foodies: Are you looking at insights/metrics and if so (1) which are most valuable to you and (2) what tools are you using to measure?

Jay Ducote, Deep Fried America: Probably not as much as I should. I look at some Facebook data but that’s about it. I see engagement on Twitter and Instagram but I don’t go too deep into analytics.

Diva Foodies: Let’s go back to Social TV in food media. Who do you think in terms of a TV chef gets it and is doing it right?

Jay Ducote, Deep Fried America: I think Alton Brown does a really good job with this social media. He is active and engaging.

Diva Foodies: What are a couple of tips you can pass along to your TV food chef pals in terms of how to do social right to build their personal brand and support their TV shows?

Diva Foodies: I love how Alton Brown uses cartoons that are shown against tweets when he live tweets Cutthroat Kitchen. We’re thinking optimistically, when Deep Fried America is on-air how will you use social media to support the show?

Jay Ducote, Deep Fried America: Well crap, I didn’t see this before I answered with Alton Brown earlier. Yes, I like that too.

I’m obviously going to do all the things that we’ve mentioned before. Beyond that, who knows! We’ll have to see what happens.

Diva Foodies: Guess great minds think alike, or something like that!

Jay since the pilot airs Saturday June 25, 2016 at 12:30p Central how can we support you in ensuring Deep Fried America lives to be part of the Travel Channel’s lineup?

Jay Ducote, Deep Fried America: Watch it, set DVRs, ask your friends to do the same, live tweet the show and tag @travelchannel and @jayducote and #deepfriedamerica. Do the same thing on Facebook and Instagram.

Diva Foodies:  As is the tradition of Diva Foodies interviews, the guest always has the last response. Wrap this anyway you’d like.

Jay Ducote, Deep Fried America: I’m certainly hoping that this turns into something much more than a pilot. It is a really exciting time and opportunity for me, but I won’t be pleased with the results unless the show gets picked up for a season. And then another. And then another.

I know I’ve got a lot of work to do ahead of me to continue to pursue my passion and chase my dreams. The TV side of everything I do is actually just a small part of my overall business model.

Bite & Booze, my culinary media company that started as a blog in 2009, and Hug Jay D, which is my product company that launched in 2014, are just the beginning.

Coming in 2017 will be my first restaurant, Gov’t Taco, a gourmet taco shop in Baton Rouge, La. And I’m sure there will be much more coming down the line as I continue to grow all of my brands and businesses.

Deep Fried America has a chance to be a huge part of that growth, so all the support and encouragement is definitely appreciated. Let’s make sure the Travel Channel knows that people out there want the show! 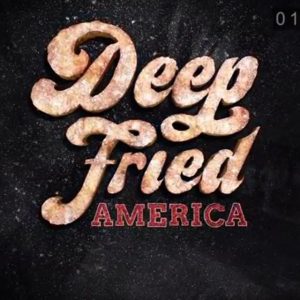 Thanks Jay! Good luck ~ you know Diva Foodies and your Food TV friends will be tweeting you on!