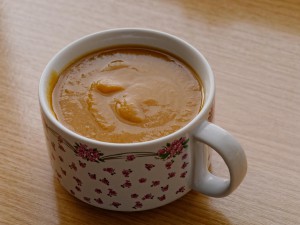 First it was Ray Allen. Then LeBron James adopted a Paleo diet. Now the latest offshoot (no pun intended) of the Paleo diet, bone broth, has turned into a food trend all its own and it has Kobe Bryant swearing that it ‘contributes’ to his NBA sustainability. Pass the bone broth, literally!

But wait , there’s more. It has it’s own hashtag on Instagram. The New York Times devoted an entire article, Bones, Broth, Bliss, that traces “how bone broth evolved from a prehistoric food to a Paleo drink”. And bone broth is heating up the restaurant scene coast to coast with one NYC establishment, Brodo,  only serving bone broth. All that, plus the NBA.

So, what exactly is bone broth?  In a NYT sentence bone broth is “the clear, concentrated meaty elixir that home cooks and chefs have known more or less forever as stock.” But is it stock or a broth? Or is it a food or a drink? Well, again using the NYT as a reference, stock and broth are used interchangeably and both include bones and meat but stock has a higher ratio of bones to meat.  For the dedicated broth-er , i.e. those followers of a Paleo diet and/or interested in the healing, nutritional benefits of bone broth “it is the content of the bones, including collagen, amino acids and minerals” that is of interest.

Bone broth is made by boiling the bones of your meat of choice in a pot of water along with some acid (vinegar, wine or tomato paste) for several hours (first boil, then simmer). The more joints in the meat, the higher the greater the nutritional benefits. For beef, cook for 48 hours, chicken 24 hours and fish approximately 8 hours should do it. This long cooking extracts the nutrients from the bones and the acid helps loosen and dissolve the bones. It’s a simple recipe.Very Paleo! Here is a slightly more elaborate version.

You may be wondering, is bone broth is a food or a drink?  Well, in this latest bone broth craze it is both!

While Nom Nom Paleo  blog author Michelle Tam tells the New York Times that she makes her own bone broth from grass-fed beef for use as a nutritious stock in Paleo soups and stews. There are many devotees of broth-ing as part of the cornerstone of healthy eating including and Sally Fallon Morell author of Nourishing Broth. Further, many ethnic cuisines such as Asian, Jewish and Caribbean believe in the medicinal, healing properties of broth based soups.And if this sounds a lot like the base ingredient for Vietnamese Pho or Japanese Ramen you would be correct.

Marco Canora, New York City Chef and cookbook author of A Good Food Day serves bone broth in sippable cups at a take out window. People are lining up! Also in New York City,  Mimi Cheng recently began selling an 18 hour simmered pasture raised chicken broth that comes in a coffee cup to go for $4.75. ABC News in Los Angeles has declared that bone broth is the new juice!

But here at Diva Foodies, just because it is Soup Month we will be eating not drinking bone broth! How about you?