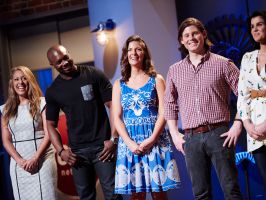 If you watched Sunday night you know that one of last week’s standouts, Emilia Cirker was sent home this week. This is notable for two reason. First of all, as was noted in last week’s Twitter stream, Emilia seemed to be the sleeper contestant who looked liked she might come out strongest in the end. However,  as we have seen before, Food Network builds people up right before they take them down. The most recent example was just last week with Rue Rusike who won the Mentor challenge in the beginning of the episode only to fall in the next challenge and then sent home.

Catching up on #FoodNetworkStar – this @emiliacirker that we're seeing? Fan-freakin-tastic. I have a new favorite.

The second reason sending Emilia home was notable was that there is now only one woman, Michelle Karam, remaining in the competition. As you noted, women don’t seem to have much “luck” as Food Network Stars. Maybe she didn’t help herself in this regard when she didn’t back down from her bash her fellow contestant stand up routine and defiantly dubbed herself the Alpha female and wore a “Break All the Rules” T-shirt.

So, what did you Tweet/think about all of the goings on?  Below is our review of your #FoodNetworkStar Twitter reviews.

Regarding Emilia, it seems that this Tweet best sums up the consensus which was that she was just too mean and the judges didn’t like her—

#FoodNetworkStar is one of my favorite shows! Tonight's episode is summed up with "Ouch Emilia". Be risky but be nice. @FoodNetwork

But still, many of you questioned why Dom continues to hold on. Tweets repeated last week’s contention that Giada just liked him. Others questioned his lack of improvement on his presentations and speculated that since he continues to be  uncomfortable presenting it would be impossible for him to be a “Food Network Star”. The Tweet below seemed to capture the sentiment best….

As bad as @emiliacirker was, Dom was still not good…& has been bad for weeks now. Didn't bobby say he needed to kill it? #FoodNetworkStar

There was really nothing but praise for Jay Ducote and Eddie Jackson. Some of you think that they should have a TV show together but most think it will be one of these two that wins #FoodNetworkStar. This Tweet seems to sum it up….

Slight edge to Eddie over Jay, but it's gonna be one of those two for sure #FoodNetworkStar https://t.co/jvCxPFt5G8

One observation we will make here regarding Jay vs Eddie is that Jay is KILLING it on Twitter. If building a social media community matters in what makes a Food Network star, and it should, Jay is waaaaay ahead of Eddie in number of followers, the number he follows and number of Tweets. And Jay is clearly working hard at social right up to 30 minutes ago!

Thanks Cece! RT @SexyBoiC: @biteandbooze you did an amazing job on Sundays episode btw. #FoodNetworkStar

Although Giada’s wardrobe was a huge distraction over the last few weeks, there was little said this week except a few observations such as this one…

So happy @GDeLaurentiis dressed appropriately tonight on #FoodNetworkStar!! Please keep it up!!

So, is it just a coincidence that another female contestant was sent home? Did Emilia’s gender have anything to do with the perception of her presentation? Well, here’s a representation of what you Tweeted…

It's the mean chick #FoodNetworkStar

@MedMamaMichelle sorta? You're AWESOME! ? you gotta beat them boys for us! #FoodNetworkStar

Another interesting week at Food Network Star on Twitter.