Whiskies of the World Atlanta Adventures

Whiskies Of The World 2018 Atlanta

For bourbon, scotch and rye fans, stepping into  Whiskies of the World aka WOW is an adventure. It’s like opening the door to a grown-up Hansel & Gretel cottage with no bad witch! But instead of candy there are hundreds of amazing dark spirits to taste. A nice plus is the event is a fund raiser for North Atlanta Rotary Foundation.

This year there were spirits from 9 countries: USA, Scotland, Ireland, India, Japan, Taiwan, Canada, England and France… WOW oh WOW indeed! Whiskies of the World is like taking a tasting trip around the globe.

Congrats to Douglas Smith and his amazing behind the dram team including Catherine and Ashley who coordinated a mountain of details to make this one-night tasting a very unique and special happening.

Thank you Whiskies of the World for the VIP media pass. My entree to the event was complementary but all opinions are those of the author.

At little of the Whiskies of the World backstory. In my interview earlier this year with Event Director Douglas Smith he told me what makes this event different and special. 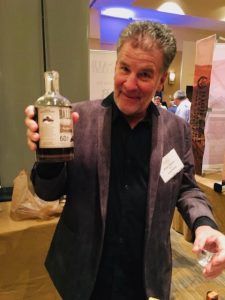 “The wide range of whiskies available, the range of consumers from the whisky curious to the aficionados, the food for pairing, the educational masterclasses and elegant women smoking cigars.” – Douglas Smith

This is my third year attending Whisky of the World and every year I learn something new, taste something amazing and revisit favorites. This year I began my adventure with a surprise taste er tasteS from Ballotin Chocolate Whiskey. Ballotin pairs aged Kentucky whiskey with artisan crafted chocolate. The stakes were high – two of my favorites in one dram. Would it delight or disappoint?

Craig Kodish, the sales director, assured me I would not be disappointed. He was right! In addition to the original Chocolate there is Bourbon Ball (my favorite), Chocolate Mint (think of a grown-up thin mint cookie!) and Caramel Turtle (which I must admit was a little too sweet for my taste). In addition to the spirits there were chocolate truffles that were to die for and get this – Ballotin Chocolate Whiskey chap stick which is so delicious it’s like a treat for your lips.

Next I had to pay my respects to whisky from Scotland and in particular those from Islay. It’s a little mind boggling to realize that some of these distilleries date back to the early 1800’s – like Laphroaig. While others like Kilchoman were founded (2005) more recently. I respectfully tasted a dram from several and (once again) put a visit to Scotland on my bucket list. 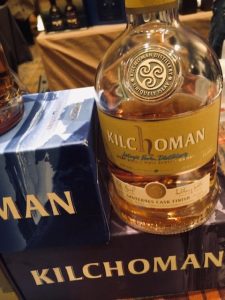 One of the fun aspects of Whisky of the Worlds is the opportunity to taste and compare multiple whiskies from a single distillery. For example, Compass Box, another whisky from Scotland offered 8 (!) different brands. By the way, if you’re curious to know more about Scotch Whisky Compass Box has a great guide and videos tutorials. 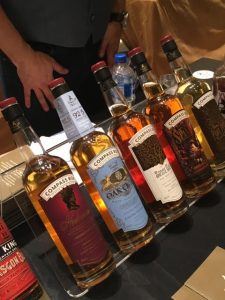 Once again I was teased by Brenne, a single malt whisky from France that is aged in cognac barrels giving it different notes than other whiskies – quite divalicious. The tease was Brenne does not distribute in Atlanta. Each year the rep assures me this will be the year…but alas, I am still waiting.😞 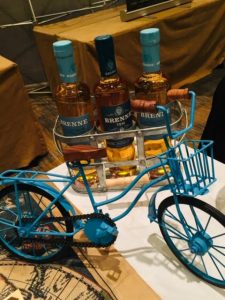 And then there were of course whisky and bourbon and from ’round the States including Kentucky, Texas, California, Tennessee, Virginia, Illinois, New York, Maryland, Colorado Utah and of course Georgia. I even tasted Apple Cider and Whiskey from J Seeds. It tasted like a crisp autumn day. I would have liked it warm with a slice of hot apple pie – yum! 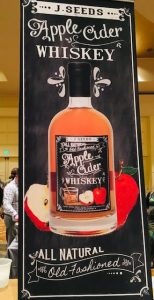 Exploring some of the new-to-me American spirits I discovered Title No 21 Rye a blend that is distilled in Texas. The website calls it”Prohibition Style” with a modern finish. Always good to pay homage to history!

At the booth right next door was Uncle Nearest. The story of Uncle Nearest, who was a real person is fascinating.

“He is the first African-American master distiller on record in the United States and thought to be responsible for helping perfect the Lincoln County Process, a requirement in being categorized as Tennessee Whiskey.”

The marketing folks behind Uncle Nearest get the importance of the story. They even had cute mini story books complete with recipes that was handed out at Whiskies of the World. By the way, the product was delicious.

Next was to find my pals at Amrut, the whisky from India that I discovered a few years ago at WOW. Sometimes you want peat and sometimes you don’t — Amrut makes both. At WOW I was offered a taste of the new single malt. Needless to say, I enjoyed it very much! 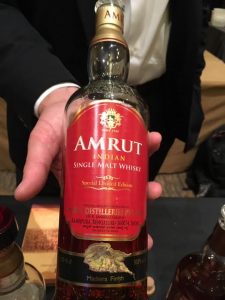 Whiskies of the World offers several “Master Classes.” In past years I’ve attended a session conducted by Raj Sabharwal aka @WhiskyRaj (excellent) and a whisky and cigar pairing (so much fun). This year I decided to learn more about Irish Whisky and attended a class conducted by Blaise Kelly from  J.J. Corry Irish Whiskey. Blaise took us through the history of Irish Whiskey blending, and of course, there were several samples to enjoy along the way!

And so….. another spectacular Whiskies of the World came to an end; but not before I say “Good Night” to the Gentleman… Gentleman Jack! 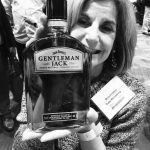 Whiskies of the World 2019 schedule is up. The lucky cities include: Austin, Dallas, Houston, San Jose, San Francisco and Atlanta.